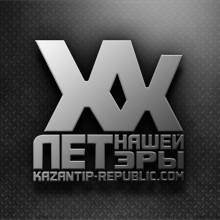 What is KaZantip? - Huh, as if we know the answer!
We’ve been groping for it since 1992 and it's still somewhere out there. We hope, you too couldn’t satisfy the most important question of your life “Who am I?” in a few words. And we don’t mean your name or occupation.
What we know for a fact is what we are not. For example, we know beyond all doubt that we are not a festival, as the press is fond of saying. (We prefer the word “project”) And we are not the Kazantip headland in somewhat far Crimea peninsula, as the Google Maps would tell you, though that’s the very place we initially went from. However, Google Maps will never tell you where to find a very small and tiny – smaller than The Vatican City and tinier than Monaco – over-enclosed land not for every one — The KaZantip Republic, though that’s what we truly are.
So, given this, now you know that The KaZantip Republic is a nonexistent state somewhere under the sun, which may remind to onlookers something of a festival.
Not bad so far, right?