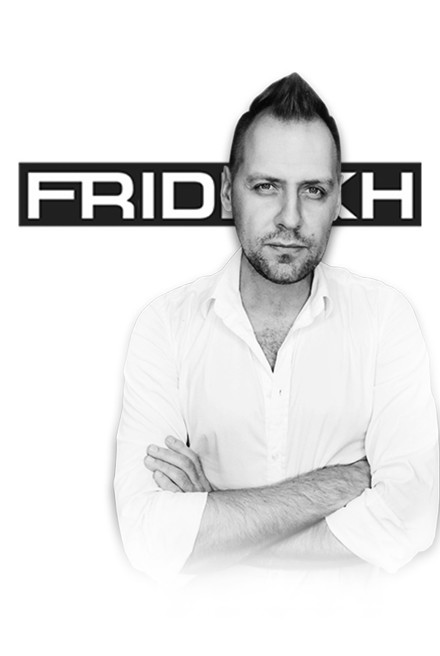 FRIDRIKH famous russian DJ & Producer in Dance music from Siberia.
Fridrikh (Sound 'H' should be pronounced).
Website: fridrikh.ru
He is working in styles:
House, Deep House, Tech House, Gospel, Afro, Soulful, Hip-Hop, Nu Disco & Lounge
He is included in the TOP100 DJs of Russia (source promodj.ru).
During of the 15 years of career, he is also succeeded as a promoter and radio presenter.
Already 10 years he is on air has a weekly radio show FRIDRIKH IN THE HOUSE (TOP100 radio shows in Russia).

FRIDRIKH IN THE HOUSE Radio-Show - a dance mix, which is very popular among clubbers in many regions.

His chart includes the release of very successful HOUSE labels around the world that lead to delight the most electoral clubbers, and the presence of his name in the playbill says that the party will be super successful and memorable!
In his personal discography of the artist is already a very popular compilation, tracks, bootlegs

85 position, all styles
per year (all countries)

48 position, all styles
per year (all countries)

42 position, all styles
per year (Russia)