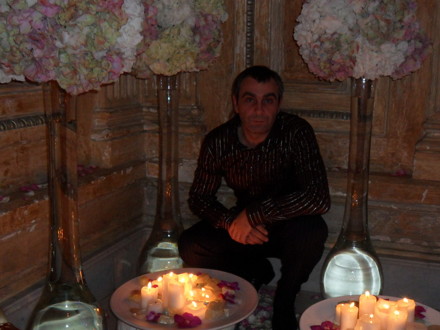 The biography as DJ has begun very much for a long time. In a far glacial age when on globe huge dinosaurs (by this time they did not wander any more have died out) has decided to borrow in music. Under New 1985 Year the first time has scrolled sausage themes in M.Boyarskogo's execution, ABBA, BONEY M and others kolbasers that time. All has broken off. Has understood, it is necessary to be engaged in music. Has borrowed. Has learned guitar art, has started to play, write music and verses. Speak it turned out. But all bent for to electronic sounding has got the best. Institute, discos, звукорежессура, army, again institute, again discos. Then bars, cafe, clubs. Threw, began, again threw, again began.... Has soon understood that music at me in a shower and without it I cannot. " Hobby for music - incurable disease where the help of doctors is senseless! ". Has lead behind revolving objects third of conscious life and uncountable set of sleepless nights. Has written down huge quantity of mixes (probably more).

Joint efforts with A.M.PROJECT in 2006 on light have appeared remixes, some of till now tear dancings. Cooperation with A.M.PROJECT proceeds, wait for new works. In 2007 there was an acquaintance with DJ NO CRAFT-th - the excellent musician and remixer. After that a little known, but already forgotten compositions find a new life. More some remixes which, I hope still become hits of dancings and not only dancings. Works are laid out on this page.

Has fulfilled on many corporate actions (nearby 400... probably it is more) . Style's in music as well as a musical collection are not limited!!! I work in different directions and very much I love experementation, mixing styles.

2005 - unary " AROUND OF LIGHT " .The circulation 100 pieces In sale did not act, has missed among friends and friends;

2006 - double disk " SUMMER DAY'S & SUMMER NIGHT'S " vol.1. Circulation 500 pieces Had sale on the top crust, Mitino, Savelovsky. In Anapa and Gelendgik very little. Left on the collection " BEST FOR DJ's " in MP3 a format. The presentation passed in an entertaining complex " PERSONA GRATA "

Here so till the present moment. Work boils, it is a lot of plans, time as always does not suffice. The next disk " SEXY NIGHT " cd 1 cd 2 is planned to be born soon. The design is ready, there were organizational questions.