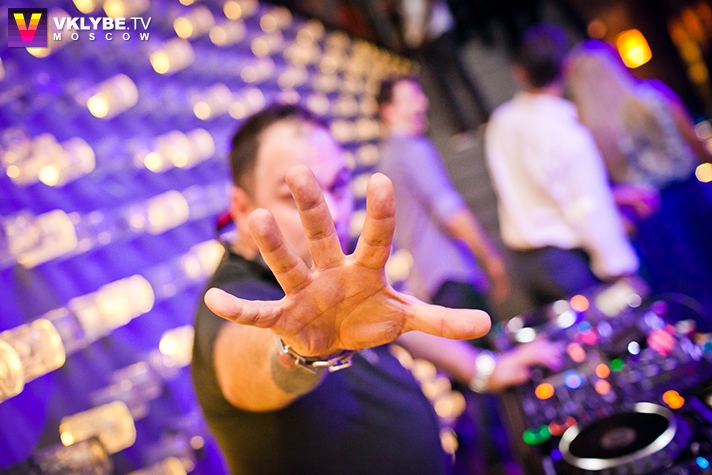 Grad is the name associated with the sexiest house music sets, his beloved by many Russians “Evening Collections” on the radio and his ability to seduce even the most glamorous crowds of El Divino, XIII, Pacha with the flow of sounds ranging from disco and garage to latino and trible which are best to describe his own, individual sound.

It has all started much earlier than DJ-ing, an absolute affection for music and desire to bring all the beauty of sounds and their meaning to his friends earned him such a credit amongst his music teachers, that they gave him whole lessons to teach his classmates about new sounds, evolving music styles, famous all around the world and unknown in communist Russia bands.

The real music influence, though, which has completely turned Grad's understanding were Kraftwerk and Depeche Mode.

Those bands have turned Grad to be more drawn to the cutting-edge, sexy house tunes, rather than medicine, which he was studying at a university at the time and professional water polo sport. He knew that, despite the medical degree, he will continue to fascinate people by his music, however sport had to be sacrificed.

Early 90's came and first night clubs started to open, this was exactly when Grad's career started to build. At the early stage he worked at the first night clubs which were unknown before in Norilsk (the most northern city in the world), then clubs in Volgograd , especially the club “ Corona ” which was made into a city's cult place after few years and times of Grad's 8 hour sets are still legendary there.

He was becoming so popular that club could not fit in all people in the city who wanted to listen to him, so he made a 2 hour radio show on the local radio station.

After coming to the biggest dance music festival in Russia – KaZantip, in 1997, where he played for the first time, his career started to shoot off. Grad has become not only one of the leading DJ's of the festival but also was one of the main organizers of all music shows there.

The time came for going further, so he moved to Moscow , starting his radio show at the best known radio “Station 2000”, broadcasting in many regions in Russia .

He was already known as the best DJ at Volgograd and Norilsk , so he started to expand Moscow dance music projects regionally as well as organizing big festivals in Moscow , like “InStancia” held in Gorky Park in 1998 with a great success.

Early 1999, has brought an absolutely new edge to Grad's career, the legendary and outstanding club was opening in Moscow and Grad was invited to be a resident. The name of the club is XIII.

A big number which has become an association with Grad's ever growing Dj name.

His warming up sessions for the top dj's have left people in ecstasy and prepared top DJ's to experience the best crowd which could possibly exist.

Futureshock and Dave Seaman described it as their favourite club of all times.

XIII becomes a cult and a living legend of Russian clubbing along with Grad's popularity amongst all Russian clubbers.

It all led to XIII's famous tour to Ibiza “From Russia with Lust” in 2000, where Grad's playing for the party at one of the most glamorous clubs in Ibiza.

Being impressed by the island Grad's launching two outstanding chill out mixes, just for the tour. They are still regarded as the best and hard to find chill out mixes in Russia.

The extraordinary Ibiza crowd loved Grad's sets which resulted in having a residency at El Divino.

Grad has built his reputation not only with warming up sessions at XIII but also his famous Garage after parties. After the invitation of Oleg Odjo in 1998, Grad has become a resident at Garage, the most intimate Moscow venue, where he started the first ever after-parties in Moscow . Few years have passed and place started to get absolutely packed between 5am and 9am, every weekend. This is precisely the time when Grad was playing. Grad is also promoting his own party “Free Your Mind” at Garage, where he transferred his popular 9 hour sets to sophisticated Moscow crowd. Grad is also famous in the fashion industry and has played for the fashion shows of the most famous Russian designers.

‘it is not unusual for me to see people having sex on the dance floor during my sets, well, if my music helps them in that its amazing, says Grad. The Russian magazine Ptyouch has rated Grad in the 5 sexiest Russian Djs. Pioneer has appointed Grad to be the main dj presenting their products in Russia . He travels a lot for gigs all around Russia as well as Ukraine , Belarus , Lithuania , Estonia , London (Gallery at Turnmills), Egypt (Pacha), Aiya-Napa etc. Fourth year in a row Grad is the part of the famous open-air festival “ORT dance” in Russia.

The debut single - Free your Mind was released in autumn 2005 on Kickin records. A year later Grad's "Piano99" took over the dance scene and came out on Chris Lake 's rising traxx label. It also came out in the compilation Ministry Of Sound presents: Housexy of Playboy.