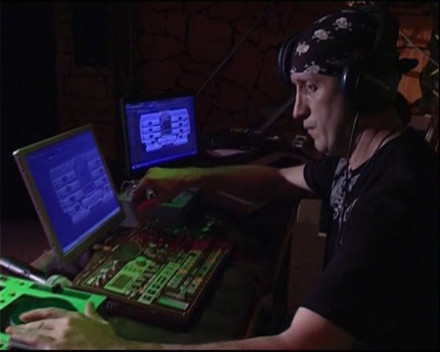 In English In Russian
DJ VORoff (Vlasov German) is the first sound producer of the Soviet Union. He performed with the world stars of electronic music such as: Carl Cox, Doctor Alban, Marcus Fureder, Dj Eston and others.

Under the nickname Jimmy Holiday, in 1989 he hosts the very first Global Gathering festival in Buenos Aires. The festival will become famous all over the world in 12 years.

History.
In 1978 in Petrozavodsk the group "ELECTRA" performed at the VIA competition. The performance lasted 20 minutes. But the most interesting thing about their performance was that the guys played to the grooves on two bobbin tape recorders. The sound was so unexpected and non-standard that no one understood what was it? With all that the competition was a patriotic song and all groups sang the obligatory song "Cuba is Distant" and works of Soviet authors.

Now imagine performing the song "Cuba is Distant" to the electronic grooves of Manfred Mann's Earth Band, SPACE, SUPERMAX, and DONNA SUMMER. With what today in DJing is called a "pit" for the transition to another key, or for the transition to the second loop. This was probably the very first "set". Once again, it was not a medley of songs by Soviet authors, but a real DJ set, where, for example, a recitative from the solo was superimposed on a cut five-second groove from "I feel love" (Donna Summer), and on "Angels at my gate" (MMEB ),a capella variation of the chorus, followed by a pumping chorus to the drums from "Carry On. Turn Me On" (Space).

And today, few people believe that the original sound of these songs is not a remix, but the original of 1978. At that time, there was not a single band with electronic sound in the USSR, and even more so with a sound close to the modern club industry, and MMEB and other groups could not even be played on dancing soirees. There were no discos then. In fact, what the guys did can be called the world's first DJ set.
In 1989 at the music school named after Modest Mussorgsky German Vlasov became a head of the the "Electronic music, basic concepts of groove and dance floor psychology" department.
In 1991 the first electronic studio in Leningrad "V.I.Pr" was created for writing professional "loops" and "grooves", or in modern slang - "beatlets". The studio was housed in the pop department of a music school and the main customers were DJs from American and European radio stations. It was an amazing time - decent and honest money ...

In 1978, together with Finnish musicians Kalevi Koskinen and creator Bob Mooga, technician Mikki Karhy in the Finnish city of Kuusamo German recorded the first professional loops that could be used by DJs on the radio, stretching and squeezing the loop without changing the key. The very first set (20 min) played in 1978 with the group "Electra". (Combining 8 prepared loops (grooves) from tape on 4 specially converted reel tape recorders).

Igor Leonidovich Chernyshev.
Professor of Music. Head of the Variety Department of the Musorgsky Music College