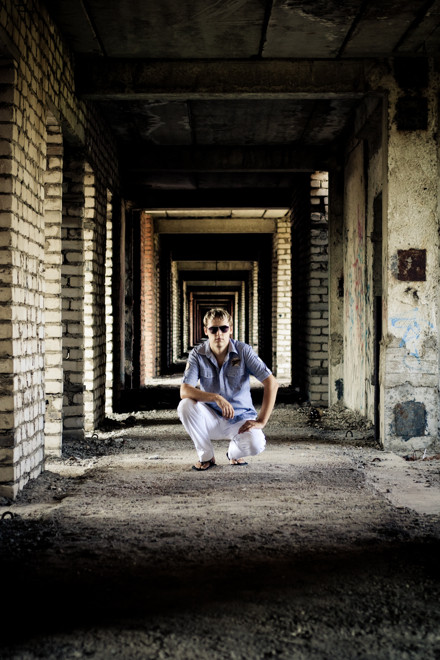 Music and DJing started to get involved in the hotel's night club "Hope" where the trainee's professional Moscow DJs who toured the south of Russia. Then in 1997, George is Senior DJ at a nightclub Mirage, where he worked for another year.

In 1998, working as a DJ in a Disco Bar of Arizona, where he worked for 2 years, closely examining professional equipment.

In 2001 victory at the Battle Novorossiysk DJs in the club, "Polygon", where Dj Quake took the first place.

In 2001, continuing a professional career in the disco club "Shark" - one of the most prestigious at that time of night clubs in Black Sea coast. Acquaintance with many famous DJs in Russia and the Krasnodar Territory. Output of the first CD "Shark Attack", and then the CD "Cosmo Drome". Then the dj sets at nightclubs: Joy, Aerobus, Strike, Dolls, Ibiza and many others.

In 2004, George works as DJ in new entertainment complex and nightclub "Maximus", where close encounters with the work of art director. Joint work with friend and partner Dj Track leads to the release of the double CD "Maxi House".

In 2005, work on a new compilation of "3 Years Project" which has recorded several remixes from Dj Quake. By the end of 2005, Dj Quake back in the disco club "Shark" for the post of the DJ and art director. Work in projects such

as "Shambala", "Marlboro open-air", "Russian-Ibiza". Organization and conduct of private parties with the club portal Krasnodar www.discotime.ru. Unique organizational experience George gets in the organization of wine festivals -

"Myskhako","Phanagoria", and "Abrau Durso", where he worked as technical director in the concert agency "Orange emotions."

In 2007, the organization of festivals of wine in an economic forum in Sochi. The yield of the new CD "Electro Man".

In 2008, the organization of his own project "Studio 54 project" in which there is a concert agency, booking and many others. Working with rap talent "Kadafi", as well as participating in radio project FEX Radio, where Dj Quake is a

In 2009, opened new horizons in the U.S., where George is planning to work in a production center West Palm Beach.

Since early 2010, signed a contract with the WPB Records and the famous project 360MIX - where George is working as a DJ and VJ. Clubs: Element, La Zen, Safari, Blue Martini, DEjavu and 131 become working weekdays for DVJ Quake. Long-awaited release promo CD "MIAMI" in the U.S., recorded at the studio 360MIX. After a hot Ultra Music Festival in Miami, returning in the summer season on the Black Sea, where George plays numerous open-air parties and continues to develop VJing in clubs in the region. Record tracks "N-City" in conjunction with the studio Lock Down Production. Organization of the concert

"Noggano" in Krasnodar region on the best venues "Strike Arena".

Recommendation: To live in YOUR pleasure in anything does not refuse!

I know: All about Show-Business

I know how to: To organize large-scale: parties, concerts, PR-events, festivals, sessions, conferences, etc. I invite you

all the stars of the world, Russian and foreign music, dance floors, etc. Turnkey - any technical and everyday riders

Laser show and a huge number of special effects. Scenic construction, farm, complex engineering designs and many others.

The work of designers on any EVENT.