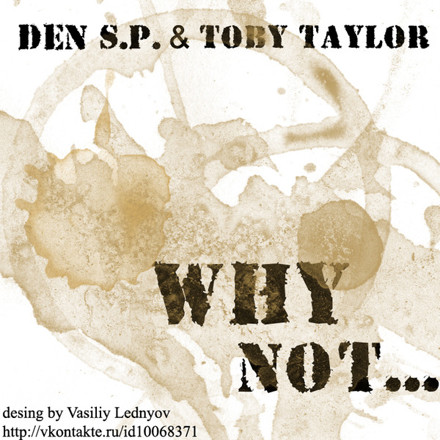 Den S.P. was born in Moscow (January, 7). He paid a great attention to music in 1990. In 1995 he took an interest in dance and electronic music. Den S.P. cooperates with well - known Russian pop projects as the arranger. Then he founded a group which was named as "Elements". A year later of the strengthened work on the project, it came out a CD "Short circuit". In 2008 Den S.P. became the producer and the arranger of the project Urik Stars and created a concert program and recorded an album. In 2009 he also became the producer and the arranger of project Den S.P. and Toby Taylor. The effort of this project is an emergence of tracks and remixes in Progressive House and Progressive Trance styles.

Toby Taylor (Skomorohov Kirill) was born in Arkhangelsk (February, 28th, 1990). He paid a great attention to music in 2004. He started to get deeper into creation and writing of dance music, during the same time he did the first steps as a DJ. In a couple of years he performed as the DJ on the first club parties under a pseudonym DJ Skok. A year later he became the participant in promogroup “G Promo Group” and "Paradise Promo Group”. He was noticed on one scene with DJ Marusha (Ger), DJ Sonar (Ger), DJ Mattias (Ger), DJ Kirilloff, Sergey Tkachev, etc. In 2009 DJ Skok decided finally to replace scenic name to Toby Taylor and become the participant of the project Den S.P. and Toby Taylor. Toby’s basic styles are Progressive House, Minimal, Techno, Tech House. Now Toby Taylor positions himself as a musician, an arranger and a DJ.