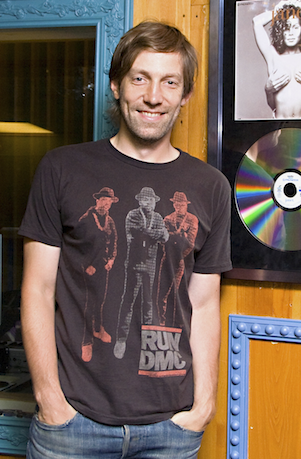 The band “TRIPLEX” was founded in 1992. They started with producing music in techno-pop style that was quite new for  Russia at this time.  In a while Andrei launched his radio show about electronic music on one of the first FM radio stations in Moscow M-Radio. It was there he first he tried his skills in djing.
In 1995 Andrei gets his first residency in a new night club “TITANIC” that in a couple of months became the best dance club in Moscow and Russia. As a resident of “TITANIC” he played all over Russia.
In 2001 Andrei gets his new residency in a night club MINISTRY awarded the Best Opening of 2001 and Best Night Club of 2002.
Within this time label “Dance Paradise”, a subdivision of “Soyuz,UK”, released several mixed compilations by DJ Ivanov named “DJ Club”
All this time Andrei continued his work in the studio. His first record was produced in cooperation with “XL” and “Midi Control” under the name “TXM Project”.  It was called “The Ethnic Story” and was released in Austria in 1995. Several records were produced and released in Russia under the name “MegaBus” in 1996.

1996
As TRIPLEX Andrei produces the track “The Catapult” that becomes a hit-single on several radio stations.
1997-1998
Track “Swimming and Diving” is on top of  hit-parades on radio stations!
The remix of a tune from a popular Russian movie about “Sherlock Holms and Dr Watson”  was nominated and won the best dance remix of the year in Funny House Dance Awards.
TRIPLEX releases his first album “The Catapult”. All released copies were sold within couple of months.
TRIPLEX received the “Funny House Dance Award” for his remix of the sound track for the movie “Sherlock Holms and Dr Watson”.
TRIPLEX makes live performance on one stage with Faithless, Culture Beat, Crystal Waters, and Quicksilver at “Maxidance” music festival.
TRIPLEX releases official cover version of a “Depeche Mode” song “The Sun & The Rainfall” included in the official Russian tribute “Dispatch for DM”
London record label “STORM” releases the vinyl with TRIPLEX club remixes on its tracks “Detentsification” and “Swimming and Diving”.
UK dance music magazine Wax calls Andrei  “Russian Pete Tong”.
1999-2000
Label “Dance Paradise” releases maxi single “!Action”. This single was included in 20 Best Seller CD in Russia in January 2000. On March 2000 the video “!Action” gets into rotation on Russian MTV and MusTV channels.
2001-2003
TRIPLEX produces the official remix of the sound track to the popular russian movie “BRIGADE”. “BMG,Russia” releases soundtrack, including two club versions and 300.000 examples were sold out within half a year
2004
The release of a new TRIPLEX album - “BEWARE OF FALSIFICATION”.
The release of an official cover version “TRIPLEX vs Tomoyasu Hotei – BATTLE WITHOUT HONOR OR HUMANITY” (from Tarantino’s “Kill Bill”).
2005
TRIPLEX in cooperation with the Finnish band  “Apocaliptica “ produces a  soundtrack for a movie " Fight With a Shadow "
Video “Fight With a Shadow " of “TRIPLEX vs Apocaliptica” hits the charts of  MTV-Russia.
2006
Andrei starts the “Red squared” project with “Planet Funk”. Their first single - “Don’t be afraid” including mixes from Planet Funk,Hoxton Whores,Tom Novy,Vandalism has been released in spring 2006 and suported by many DJs all over the world and was TOP N1 on several radiostations.

Nowadays DJ Andrei Ivanov combines his work in studio with djing. He is also well known as probably the best remixer all over the Russia. Being a VIP-resident dj of one of most popular club in Moscow – “Fabrique”, he played with special guests only such a Todd Terri, Armand Van Helden, Alex Neri, Sneak, Spiller,Timo Maas,Sono,Harry «Choo Choo» Romero and many others.

At this moment Andrei is one of the most talented and professional djs and producers in Russia and ex-USSR.