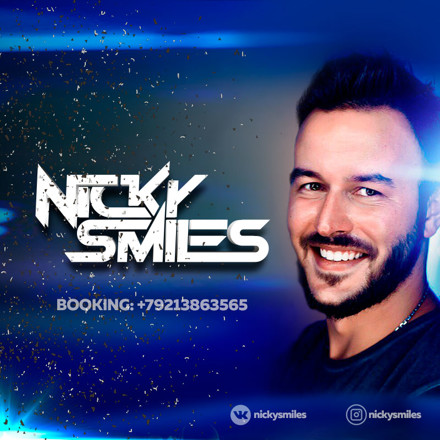 Nicky Smiles is a young and upcoming St. Petersburg DJ and musician. He started his career in 2008 after successful completion of the first professional school DJ MixMaster. The debut was a party inspection in the DJ-bar "Journalist", where Nicky Smiles proved that he has its own musical style.

In the sets of this DJ you always hear only memorable material, carefully selected prior to each performance. Favorite styles - House, Funky House, Electro, Electro House, Progressive House. Nikita is also engaged in writing his own music tracks and remixes that have been appreciated by many fans of electronic music. Nicky Smiles constantly improving his skills and abilities, as it believes that it is impossible to stand still but must always move forward, forward in life and always with the music!

Nicky Smiles is in St. Petersburg promotional groups MixMaster DJ Team and Egoiste Project, where he actively participated in various activities in the city of St. Petersburg, is a professor in the First Federal Dj School MixMaster.

In 2009 opened his own music label Smiles Records, which produced releases from both well-known musicians, and from yet proven talent.