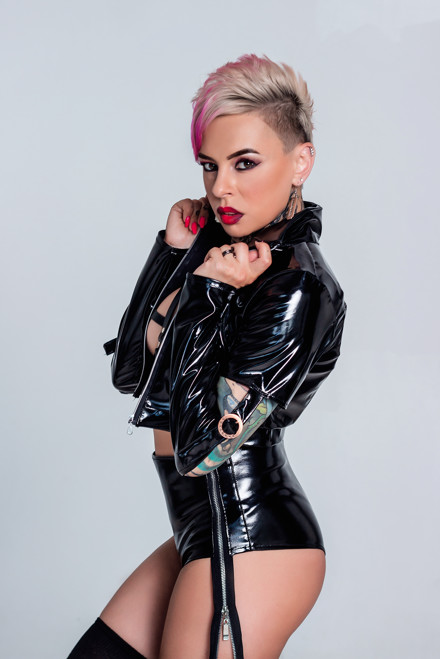 In English In Russian
​Dj Kaprizz is the brightest DJ girl of the Krasnodar Territory (Russia), included
in 4 of the best DJs of the city of Sochi (еhe сapital of the Olympic games in
2014) according to the Night2day.ru club portal.
Creative nickname (how to correctly pronounce “Kapreeze”) Dj Kaprizz - top
DJ of the city of Sochi, Russia.
Dj Kaprizz is a popular media personality, style icon, the brightest and most
outrageous girl-DJ of the city of Sochi and Krasnodar region, who has been
rocking a dance floors for more than 13 years (behind turntables since 2007.)
Charismatic girl with unrestrained energy and excellent musical taste, whose
sets are mixed with exquisite luxury and the spirit of rock and roll. Dj Kaprizz
quickly conquered Sochi - in three years there was a huge career growth: from a
resident of the best places of the city to a performance at the Russian stage of
Formula 1 Russian Grand Prix races at the opening of the Mumij Troll (Russian
popular rock-group), which was attended by about 5,000 people.
Individual style and bright appearance allowed Evgenia to become the official
DJ of the all-Russian fashion Week (Sochi Fashion Week), held in Sochi twice
a year. The most fashionable social events are held with music from Dj Kaprizz.
Evgenia was invited by the STS TV company to participate in the filming of the
series "Kitchen: the war for the hotel"(popular russian TV series). When
choosing a candidate for the role of a girl DJ, there was no doubt-the image
perfectly suited the role in the series. Evgenia plays herself in the 5th episode of
the new season (premiere from December 2, 2019)
Evgenia also works with the Sochi city Culture Department, is a frequent guest
at city events, and is the official DJ of the Sochi city Day 2019 She performed
at the main venue, the South mole Square, with an audience of thousands.
For several years in a row, Evgenia is the official partner and DJ of SIFFA-the
Sochi international film festival and film award - the first world-class event that
brings together filmmakers from Russia, Great Britain and other countries in
Sochi. The film festival is attended by experienced industry professionals, as
well as famous guests from all over the world.
Dj Kaprizz has established itself in two completely opposite directions:
-fashion dj (fashion shows, openings, brand presentations, private and social
events) and
-rockstar dj (club parties, rock concerts, frequent guest of tattoo and bike
festivals). The only female DJ who plays rock music in all its directions,
supports aspiring performers, and works in creative tandem with musicians and
live instruments.
Combining the incompatible, breaking the framework and stereotypes, Dj
Kaprizz shows his versatility and confidence in his business, which is what the
Sochi audience loved. The name DJ Kaprizz has become synonymous with
style, cool party and great music.
In addition to the above directions, the Dj Kaprizz music format includes almost
all styles of modern music - from Commerce to underground. Evgenia
approaches each event individually, whether it is a fashion show, a Banquet or a
party of a certain theme. Easily mixes styles and selects music according to the
setting. A team of stylists, make-up artists and other professionals work on Dj
Kaprizz images.
Eugenia's motto: "from luxury to complete partyrock". Dj Kaprizz makes any
party brighter and people happier!
Multi-format artist: Club\Event\RockStar\Fashion Dj
The first official DJ of the all Russian fashion week in Sochi Sochi Fashion
Week 2019
Finalist of the contest "Miss Tattoo Sochi" 2019
Resident and guest of the best and most relevant sites in Sochi:
Vinograd Pool, Sochi Casino, Casino Boomerang, Sochi Marriott Hottel,
London Restaurant Group restaurants and many others.
Resident
- #GirlsPartySochi project
- fashion parties at #WinwaySochi boutique,
- #PlayBoyPartySochi,
-- poker club parties on the World Poker Tour
- official DJ of the International Kids Fashion Week 2017 competition
- official DJ of the Miss Supermodel worldwide Russia 2019 beauty contest
- official DJ of the all-Russian fashion Week (Sochi Fashion Week)
- official DJ of the Russian stage of Formula 1 Russian Grand Prix races
- official DJ of the first reality show in Sochi “Wedding in 30 days”
NEW!!!Лови новое видео с самой яркой вечеринки уходящего лета вместе с DJ Kaprizz!
promodj.com/djkaprizz/videos/7…