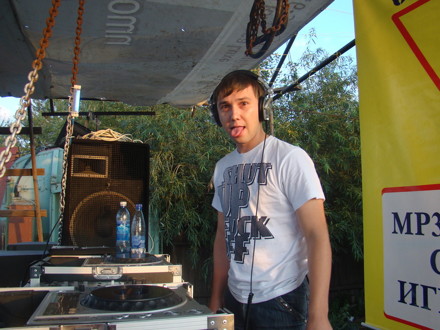 Electronic of Music has grown fond since the childhood when has for the first time heard 2 Unlimited (1993). After that Red Star also "has sat down" on this music. As DJ has started to develop in Samara in 2006 when there was a good access to music. On the sly mastered programs on the computer, for the sake of interest!!!! Under nik-name DJ Amfitaminoff has written down the first promo mix which have estimated as qualitative work. In February, 2008 moves to live in the city of Perm. Change of a city and change nik-name on DJ Red Star. With the friend DJ JOHN agrees about teamwork. In August 2008 gets acquainted with one of the best Dj's cities of Astrakhan DJ Tyumenev, further gets acquainted with Ron May (project Snezhno). Acquaintance brings the pluses and on October, 9th, 2008 there are 2 releases on label R.M records (Russia) Maris - Allo (DJ Red Star remix) and DJ Red Star - Fuck In The Cocaine. And on October, 17th, 2008 The remix on track Maris - Allo (DJ Red Star remix) gets to Radio show Mixadance on radio Megapolis FM (Leaders DJ Mixon and DJ Sveta).At the moment continues to please all their tracks, and unforgettable performances!!

2. At record Mix on a disk, with the help "Nero Burning ROM". To choose a command «to Make audio of CD» further, to add Mix in the list, to press it the right button of the mouse, to choose "the Property" command, behind that in point «Lists, Limits, Section», to press «to Divide index positions», the chosen paths will be divided into tracks.

3. ATTENTION! At record Mix on a disk be convinced that in the menu of adjustment of record of the project, there is a tick opposite to point, record «Without a pause between paths»!!!