Sergey Kryuchkov, known not only in Russia but also abroad as  a K.S.Y., was born in 1984 in Voronezh. He graduated from Voronezh State Technical University in 2006. Department of Journalism and HRT in 2012. His DJ career began in the mid-90th to the dance radio station "Techno FM».

Excellent knowledge of DJ equipment and impeccable taste in music - give the first results. DJ KSY in 2005, occupies first place in the professional contest «Best Dj Award From K2». A year later participated in it as a member of  the jury.

In 2007 K.S.Y. went to the festival of electronic music - «Sonar» in Barcelona. Spain has inspired him to produce the same year the disc BCN. Soon, along with Barcelona's DJ Kazak (Jess) K.S.Y. issued a joint double CD «Beautiful Life».

He successfully participates in the Catalan club Lika Lounge.

In 2009, Sergey won the DJ - tournament "Open Energy", which was held by the company Red Bull in Voronezh.

During this period K.S.Y. has become a popular DJ, not only in his hometown, but also in Moscow. Behind him firmly entrenched image of the intellectual-music fan, his music is able to warm up as the big dance floors and cozy clubs. Received a warm welcome in Art - "citadel" of Russian design. Mixes DJ K.S.Y. were heard in the vast Moscow GUM on Megapolis FM radio stations and Deep Mix Moscow Radio, the clubs' Sugar »,« FM cafe », etc.

A few years K.S.Y. is in the top 40 of the best DJs on two Russian professional ratings (Dj.ru, Best.muzzone.ru).

Currently, despite the numerous performances, K.S.Y. actively writes and publishes original music, working on his own label. 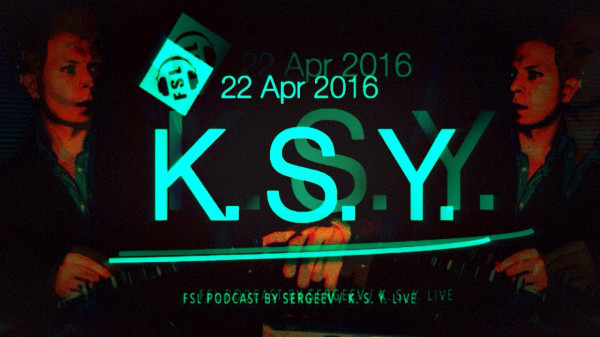