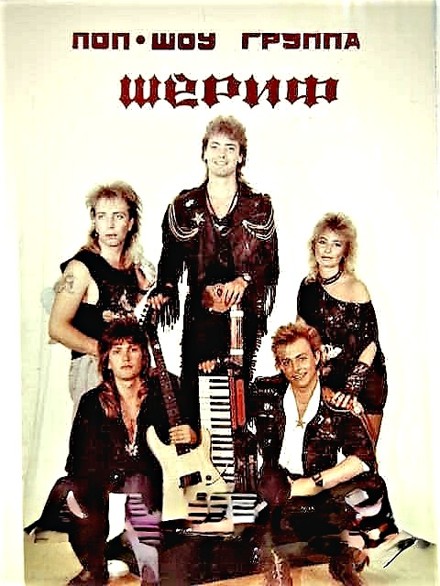 In English In Russian
SHERIFF group

Founder and Leader of the Official SHERIFF Group - Konstantin Terentyev.

All songs, videos, performances, facts related to the SHERIFF group were published only under the leadership of Konstantin Terentyev - they are the only official ones and are dated before 2006.

The SHERIFF group was created in 1990,

at that time, since 1988, Konstantin Terentyev is one of the two creators, producer and keyboardist of the STARS group.

"Don't go away" - shooting for the musical program "Pearl Island",

the song "Where are you?" and performed at the concert "Gala Records Presents",

premiere of the video for the song "Where are you?" in the programs "Marathon-15", "Soundtrack".

June 14, 1992 Konstantin Terentyev and the SHERIFF group - TV shooting with the song "Where are you?" in the final concert of HIT - TOP - SHOW 50/50, in honor of the 3rd anniversary of the 50/50 program in the Kremlin Palace of Congresses,

on the basis of the filming of the performance in this concert, the second version of the video for the song "Where are you?"

recorded and presented to the public the songs "Fairy Forest" and "Julia" - a cover of the song "Blue System" - "Romeo & Juliet",

the album "Julia" was released.

the television premiere of the song "Julia" took place.

SHERIFF and STARS have toured extensively in joint programs. Large touring tours including China have been very successful.

Konstantin Terentyev, together with Roman Zhukov, participates in the Nemo Project, in 1997 the album Back to the Future was published,

to which Konstantin Terentyev and Roman Zhukov presented a joint clip "No drugs / Space elevator" on Channel One,

also on the TV6 Moscow channel in the Party Zone program - a joint performance by K. Terentyev and R. Zhukov with the song "White Color".

the album "Julia" was reissued, where "Dance under the Moon" was added to the previously published songs - authorship - Elena and Konstantin Terentyevs.

The ZVEZDY group was created in 1988 by Konstantin Terentyev - producer and keyboard player of the group, and Natalia Gulkina - soloist and author of several songs of the group.

In the period 1988 - 1994 the STARS group had a tight schedule of concerts - tours, large venues, performances, clips, press, TV, charts.

Konstantin Terentyev took part in the filming of the group's videos: The sun is burning (two versions), Disco, My little prince, Ivanhoe.

In 1992, together with producer Konstantin Terentyev, the following were created:

dance group of the STARS group,

school-studio "New Generation" for gifted children on the basis of the center of children's creativity "Constellation".

Producer Konstantin Terentyev helped make STARS a worthy competitor to the MIRAGE group and others, which secured all-Union fame for Natalia Gulkina for many years.

The sun is on (two versions)