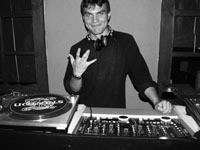 Ray Poima was born in 1983. The first acquaintance to music has occurred in 80. Its favourite songs "Call Me" by Blondie and "Popcorn" by Jean-Michele Jarre. And a favourite album became "Fighting The World" by Manowar. In the mid-nineties by listening The Prodigy he has opened for himself electronic music and has taken the first creative steps in legendary Scream Tracker. After 2000 Ray Poima has confidently risen on feet in business on music and mood creation. He is the composer, the musician and DJ in one person. Its debut album "Breakbeat Cowboy" came out in november 2013.