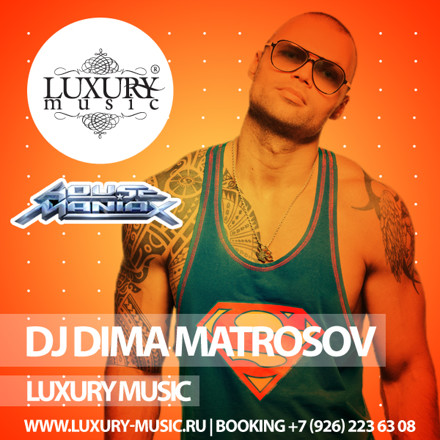 DJ DIMA MATROSOV is a young, ambitious and very popular DJ, active circuiter and the hero of scandalous reality show «HOLIDAYS IN MEXICO 2» by MTV! He is a permanent guest of the most famous Kiev club project SKYBAR and the frequent resident of Kiev parties.

His music is a symbiosis of the classic Disco and Vocal House along with the energetics of the popular Electro and temper of the Tech House style.

Within his relatively short career he managed to play in the most of the best Kiev clubs like Kaif, Tzar-project, Arena-entertainment, Barsky, AURA restobar, SKYBAR and others, he guested DJFM radio station and headlined top parties, arranged by Kiev promoters!

Audience called him «SEX SYMBOL OF HOUSE music» for his exclusive performances.

DJ DIMA MATROSOV is the one, who will be still remembered by women for a long time after his appearance!

He is in the TOP 100 DJS list by PROMODJ.COM rating and was nominated as a Discovery of the year 2007 by TOP MUSIC magazine.