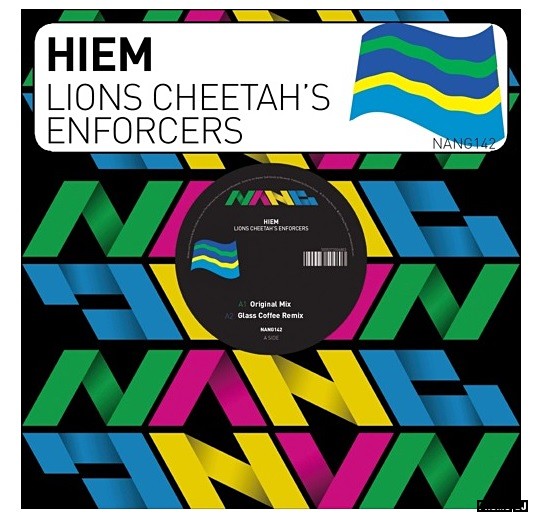 Nang nips into the teleport to Sheffield for its next release... Hiem are back on the block! The dynamic duo of Bozzwell and Nick Eastwood burst forth onto the scene once more in their first new material since the 2013 "Escape From Division Street" album. As a taster for their third LP due in 2016 we are ever so pleased to be releasing (from what could be seen as a slightly left field direction) the ostentatious and highfalutin "Lions, Cheetahs, Enforcers".

Its big, its bold, its slightly weird and we love it. Bozzy deathwish vocal over a ponderous steamroller bassline with machine gun percussion and beats. First up in the remix department we head off to eastern Russia for one of our favorite remix crews "Kim and Buran". They bring disco beats to the fore with their ever-slick smooth bass, pads and swirling synth disco master-class. Karaman is next up. He takes things in a underground direction with his warbling bassline and twisted lead synth rework.

Hiem have worked with a fair few legends themselves, Roots Manuver and 80's heroes Phil Oakey and Visage. So its quite appropriate that the next remix from Alex Dee Gladenko is glowing in an 80's aura. Tight percussion and tightly compressed punchy bass reigning supreme. Next its off to Dubai with Glass Coffee and his peak time house remix.

Things round off with Audio Luxury and their fine remix.. it starts as nu disco stomper and ends with layers of distorted guitar. Go Figure.

We end the package with a remix from Klein and MBO. Although sadly "MBO" Mario Boncaldo passed on in Feb 2015 his dying wishes were to preserve the name "Klein and MBO". Here his partner Tony Carrasco (Klein) does a fine job with collaborator John Metus keeping things electronic, electro and bombastic.

Stay tuned for more from the Sheffield Batman and Robin in 2016.