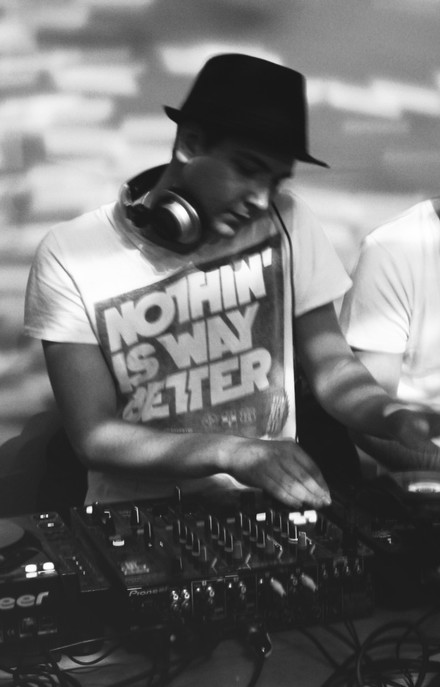 Artie Flexs - Every Beat Is Yours LP

Artie Flexs was born in town of Riga(Latvia).

We will not go deep in that he loves music from his childhood, it’s all around. We will begin with that he began his dj career in 2002 graduating dj school, which(realizing it now) gave nothing, except for bases of dj’ing.

Beginning his career(as many) with little clubs Artie Flexs slowly took his experience. And in 2004 he gets a residency in a small club, what served to him as a advancement. In the same year he began to study music production.

2005 became the year of enlightening for him, acquaintance with Dj Abu, and in total strong friendship, opening of his basic style – Progressive House(by then in Latvia that style was not so popular as now).

In 2006 he had his first experience in an underground club, sharing the decks with more professional dj’s.

He devoted his time in 2008 to creation and more serious study of music, creating the enormous amount of loops and grooves.

In 2009 his first work went out in April – “Fun Time” on Ukrainian label Bashi Records, which is on sale in all largest download stores.

A debut release went out in July - “Disco Space EP” by Lost My Dog Records, exclusively for Beatport.com, in August the same release will be in all the largest download stores around the world. “Disco Space EP” was chosen as “Tune Of The Month” by MixMag. This release also got a lot of support from the worlds famous radio stations, as like : Ministry Of Sound, Proton, Raunchy Rhythms and many more.

After a successful debut release he got a request to remix a composition of Latenight Society - "Do It Right" which is now on sale in all leading download stores and also on vinyl.

In November another release goes out under the name "Damaged EP" on Lost My Dog. "Damaged EP" got many support from the world dj’s, such as: Nick Warren, Fred Everything, Dubfire, Brothers Vibe...

Music style of Artie Flexs is compared to such artists as: 2020 Soundsystem, Spirit Catcher and Motor City Drum Ensemble.

2010 began with a bang for Artie. On 18th of January Artie Flexs released his debut album "The Journey" on Lost My Dog. An album can be purchased in all leading download stores and also get the album quite free of charge, simply register on the Lost My Dog page on the internet.

Now level of dj’ing and music writing skills for Artie Flexs attained more professional heights. His sets and music are saturated with an intellectual and modern drive, possibly with a look in the future.

Artie Flexs - Over The Bridge EP (incl. Remixes) OUT NOW

Artie Flexs 's journey in the dj world began in 2002 when he graduated from dj school in his hometown of Riga , Latvia . Slowly he started to gain experience both at the decks and in the studio , and his production skills were noticed by such labels as Lost My Dog , HiFi Stories , Spring Tube and many more .

Now with his first appearance on Asymmetric Recordings , which we strongly believe will be the first out of many , he proves once again that he is a guy that should be taken very seriously . His unmistakably sparkling and pumping beats , elevating arrangements and quality sound will leave the listener in anticipation , wanting for more .

Milan - based Danny Deep delivers his remix for Lost & Found and Blood Groove & Kikis support the original title of Over the Bridge with their interpretation .

After some successful releases on labels like Deepology, Kansak and Cromarti - Latvian talent Artie Flexs is back on Spring Tube with one of his brightest works to date in our opinion - "Down The Groove". The single includes original version and 5 remixes.

Firstly, this time in the package we have second appearances on our label from Turkish Ugur Soygur (frequent guest in Spring Tube Session radioshow) and Russian Trapezform (the host of Round Triangle Session - our second label's radioshow).

Secondly, the remixes by our beloved resident-artists - Monojoke from Poland and Blood Groove & Kikis from Latvia. Another their works that once again show why we love these guys' sound so much.

Finally, the new name for our roster - one of the leading Latvian DJs and producers - Electricano. Starlight, Enhanced, Proton, his own Electricano Recordings and many others - these are the labels with releases on which this artist is known. We are proud to have him also in our family now.

Artie Flexs - I Can Feel (incl. Remixes) OUT NOW!

Our seventeenth release is first from four remixed editions for original tracks from Spring Tube's debut sampler (April 2010). We choose four brightest tracks to be remixed by other artists and one of these works is "I Can Feel" by our resident artist Artie Flexs from Latvia.

On the remix duties this time we are welcome three new artists for Spring Tube's roster.

One of Audio Bite Records' heads and this label's main remixer - Dutch Ramiro Bernabela, with nice deep and smooth interpretation.

And finally, another more deeper version by Brazilian newcomer Cfunck (Cesar Funck) - his tracks already were played by the A-Class house DJs and he has attracted our attention with great EP on Bralli Records earlier this year.

All these artists at this moment are finishing another new works for our label - expect them soon, but now enjoy this single. Spring Tube 2010.

My new EP has came out on a BIT Records Mexico sub label - KansaK Recordings!

So what's in the box? 2 original tracks from Krummstoff himself and remixes from Onur Ozman, Sendos Fuera and Artie Flexs.