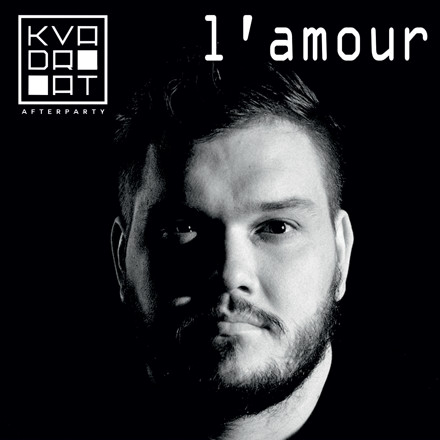 L’AMOUR is one of the top DJs of St. Petersburg underground since 2008. He began his career in the cult club «TUNNEL». Afterwards he was the resident of more than 20 platforms of the northern capital. The Music Director of CENTRAL STATION (St. Petersburg). He is a creator and committed inspirer of the longest afterparty «CLUB`OK». Together with NOSTA, since 2014, the creator of the most successful Saint-Petersburg`s afterparty – KVADRAT AFTERPARTY. The organizer of sensational parties on the night Neva - KVADRAT RIVER LOUNGE. The creator and ideological inspirer of the public of the ethnic music RITUAL DANCE. The resident of the formation «FASHION SOUND». He plays in such genres as TECH house, DEEP house, deep techno, nu-disco, indie dance on the same stages with such tops as METODI HRISTOV, GIOM, MIRCO CARUSO, MARCELO MENDEZ, FERNANDO CAMPO, VANILA ACE, KANT, THIRD SON, S.K.A.M., AGRABA, PATRICK PODAGE, GABRIEL SORDO, VOLAC, RENE AMESZ, SAMMY W & ALEX E, DANI SBERT, MATVEY EMERSON, IVAN SPELL and many others. You definitely cannot keep your feet under his sets.