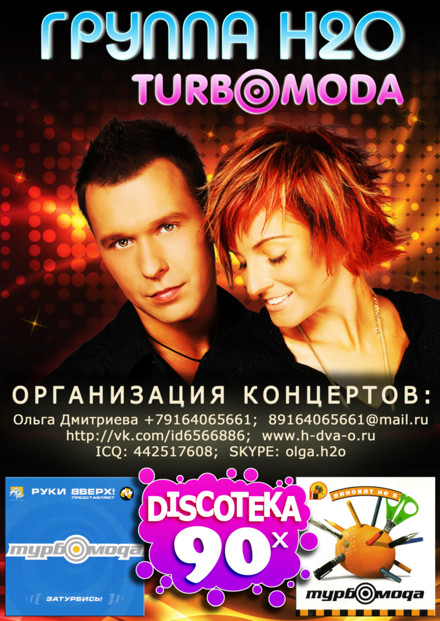 Of their song blew up the dance floors! Original vocals, which were filled with all the hits of group "TURBOMODA"! The members of the group "H2O": Е.Kholmskiy and S.Oleynik - the soloists of the popular in the late 90's and early 2000's group "TURBOMODA", the producer of which was S.Zhukov (group HANDS UP!).

In the concert program of the most favorite author hits of the group "H2O", as well as the new songs!

We have something to remember - it was the music of the 90's, and created the crazy atmosphere of freedom, in which we once again get involved with a "DISCO 90's"!!!

Experience, professional work on the stage, the hits - recognizable from the first chords, live performance of the song, permanent interactive communication with the audience - all this is waiting for You at the concert of the group "H2O"!!!