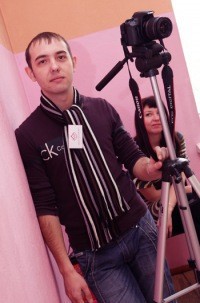 "Space Beside Me" Out Now! 19, august. Beatport Exclusive!

Start from the regular school discos, Russian equipment: a tape recorder "Nota", two columns of 50 W and a pencil to rewind tapes. This was followed by trips to town camps, permanent disco crossings with equipment, work in CHDYUTS "Iskra" DJ. In parallel, work on the first radio station city of sound. In the same period, Slava Electrick trying to write his first songs, which have received not as wanted, but it gives him more strength and desire to become a good musician. Much enthusiasm was still popular: Speed Garage, 2 Step and Pumping from which indeed the glory and began to receive his first musical experience. Then followed the first steps in the writing of Electro, Vyacheslav already understood that this is the direction he likes and he will give up free time for exploration.

At the moment, Vyacheslav is one of the few musicians who, in the creation of each song uses several styles (Tech, Techno, Breaks, 8-Bit, etc.) by selecting from all very best, creating a completely unlike each other songs, from aggressive Electro to the melodic, taking into heaven of Progressive House. Constantly striving for innovative and original sound, not being afraid to experiment, thereby creating his own unique style, capturing a growing audience, from the simple to the audience of professional musicians.
Preferences in equipment: CD players: Pioneer CDJ800 (mk2), Pioneer CDJ1000 (mk3) Console: Pioneer DJM 600 and Pioneer DJM 800.

"Just downloaded your tracks & I really like 'Change The World'. Its got a great electro feel to it & I think it will work really well in a club. "

"I have had a listen to both your tracks and both are sounding good, both have a different feel to them,
but i like them both, good work. "