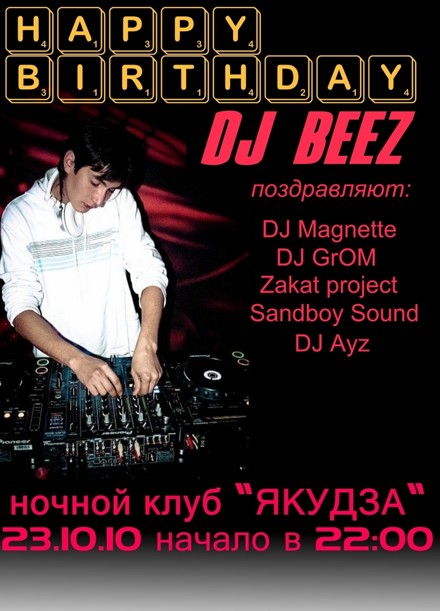 Kytin Artyom - more known under creative pseudonym DJ Beez. Acquaintance to electronic music has occurred in the childhood - listened to it from old kind parental vinyl. Yes - electronics of that time strongly differed from present, in process of a growing my musical preferences changed. More than 10 years have devoted Hip – HoP to culture in particular to such direction as: Break dance in one of Kursk commands (No Limit’s crew) danced more than 6 years (has achieved in it of certain successes).

To be engaged DJингом at that point in time it was not represented possible so - as at us this culture hasn't been developed, was in a rudiment more likely.

For the first time became for the panel in 2008, but at that point in time musical preferences have changed has started to gravitate to such music as Drum and Bass in parallel with it has started to write music in this style,

Drum and Bass continued to play till 2010, yet hasn't opened for itself a new direction: progressive house, trance works in these styles on the present.

As a lot of time gives to a writing to electronic music. Estimate which - you can on my page: djbeez.pdj.ru

Together with> DJGrOM th project United Progressive DJ's (UPD) by which advancement we is created we are engaged.

The center of Leisure КГТУ